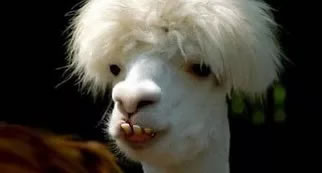 We (meaning the children and I) like to listen to SkyRock on French radio in the morning – it’s the audio equivalent of eating Frazzles: the latter for not being real bacon, the former not ‘proper’ radio, but both very enjoyable nonetheless.

In the space of 20 minutes I counted 7 anglicisms, amongst which were: ‘le morning show’, ‘Happy Birthday’, and ‘switcher’ – as in to switch something around. The context to this was something about Kim Kardashian, but I wasn’t following as we were driving past a field with an improbable-looking llama in amongst some very probable-looking cows. The llama was looking as baffled as to what it was doing there as anyone – like a refugee from Dr Seuss in a picture book about traditional farming and this was temporarily more amusing than the radio.

I felt the same about the llama as I do about switcher: the neologism really stuck out because (obviously) it’s just a made up word that only appears to come from another language … thus it jars and that makes its otherwise perfectly acceptable collection of syllables and sounds seem a bit ridiculous and ugly.

Like the llama that was well within its animal rights to be in a field mooching about, eating grass (not indoors reading a book), well switcher is fine in a sentence, I guess. It’s a word because it’s got letters and a meaning but my gut reaction was that if you are going to pinch, then proceed to hack hardy perennial verbs like to switch about, at least do it with some artistry.

However, unlike the Academie Francaise, I don’t get that animated over borrowed words in any language: as a linguistic liberal I’m happy for language to evolve how people see fit, so switcher can stay as long as it wears a hat and tries to fit in.

This bastardisation of words did get me thinking, though, about where English is going to go over the next fifty to a hundred years.

A little while ago, I was fairly convinced that the relentless march of the English language would eventually lead to the world’s first global lingua franca and learning another language would become a form of linguistic condescension, and not a complete necessity to pass exams or get drunk on holiday.

To a degree this has already happened: we know that almost everyone’s second language of choice is English and most multi-nationals use it from boardroom to Twitter. However, it’s not going quite the way that the purists hoped.

Words even more obscure than switcher are creeping in: a spare tyre in India is a Stepney, based (and I love this) on the name of brand from Wales. To Prepone in Asia means to bring something forward in time and Woke in the USA is to be aware to something.

In fact, it seems clear that English is in danger of doing a Latin whose words went south (Italian, Spanish etc) and grammar sloped off north in a huff (German).

Certainly, for the first ten minutes of the film, Social Network, I was lost: it was English but against a noisy background (the opening scene is a pub conversation), I could recognise most of the words as English but I found it impossible to get any meaning: like Julio Geordio speaking to Harry Enfield.

In fact, I am reasonably sure than in less than a decade a pensioner in Glasgow is not going to be able to follow what a teenager in downtown Miami is saying unless everyone agrees to speak slowly and use lots of hand signals.

So I predict by 2050 we at the Aktuel Translation Group will be translating English for speakers across different continents (and, quite possibly, age groups) almost as much as we are doing English into French or German. Except we almost certainly won’t call it translation, anymore, and English will go by a range of other names, depending on which version you are using.

Next week … has language done more harm than good?