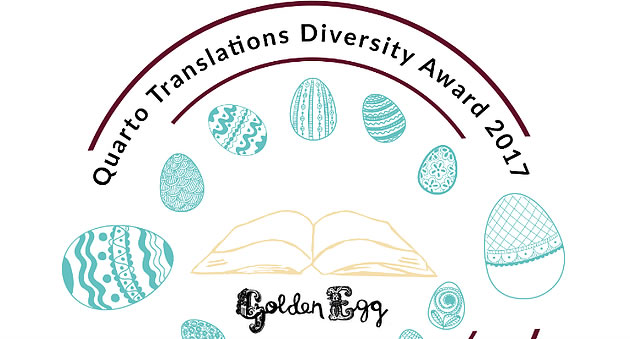 The Quarto Diversity Awards for Children’s Writers got into second gear last week with a first press release and now we’ve got a logo by the talented Toma Checov (see above).

This year’s sponsorship is a bit special (see below): not only are we supporting something I feel genuinely enthusiastic about but I think our money has every chance of doing something really good: for writers, yes … but this award is mainly about young readers.

Getting involved in this is a nice feeling for someone (me) who has spent his career simply making the most of fortuitous situations, instead of pursing decent and honourable ideologies.

Golden Egg Academy (GEA), founded by the rather marvellous Imogen Cooper, does a fantastic job making talented people into great writers for children. GEA is unique, simply because it’s utterly sincere in its endeavours, as is Imogen. I love that and I’m rather fond of the people Imogen has chosen to surround herself with: not least, Dr Vanessa Harbour, who is the heart and soul of this award.

As a child, sitting at home in the school holidays on my own, I learned that books are best as safe places from where you can explore real life.

Diversity is crucial because, to feel secure, children want to feel they belong and identifying with one’s heroes in books is surely one of the most satisfying ways they can do this. Connecting with a character makes it possible for a kind of magic to happen. Doors open and, suddenly, what you are reading is more than just make believe – it’s as close to the real as you can get: but without having to remember to make your bed or brush your teeth or do anything boring because you are told to by a grown-up.

I loved boarding school – during the term – but I was friendless throughout holidays because we lived in France and about as far from anywhere with other children as was possible. Plus, French TV sucks: in the early ’80s it consisted of quiz shows for retired people and the news. Any children’s programmes were indecipherable Japanese cartoons with people in masks yelling at each other. So, I read, and the characters I bonded with were pretty much the only dialogue I had with anyone I could relate to for weeks at a time.

Obviously, it’s nice to think we can help someone realise their dream of becoming an author, but that is a side issue. The main thing is getting as diverse a spread of writers out there as possible, writing great books that engage with the huge diversity of children – young readers who long to recognise something of themselves in a book, albeit an inspirational self who plays the lead and wins. And why not?

Quarto is a multinational (obviously, we’re in translation) but we’re not blue chip or anything remotely like that. However, the Quarto Translations Diversity Award is really important and therefore it is worth every penny we can give them. And more, frankly.

Doing good and actually being good are different – even I know that – but, it’s a fine line and often blurry.

Useful stuff about the Award

Submissions for the awards will be open from April until July. We will be in contact with a variety of communities and charities to ensure that the word gets out to the appropriate people. Submissions are open to diverse writers and those wishing to become editors, also for those writing about diverse characters.

The Awards will be run annually and are in the form of financial grants awarded on an individual basis.

The award defines itself as being aimed at encouraging diverse writers and those aspiring to be editors by providing opportunities for talented people who would not normally be able to benefit from the expertise at The Golden Egg Academy.

We are defining diversity according to the Inclusive Minds definition, which includes: race and heritage, disability, gender and gender identity, sexual orientation, age, socio-economic status, religion and culture. The awards will be for writers of talent whose work is likely to reach publishable standard, for the ultimate aim is to enable children to see themselves in the literature they are reading and meet published writers that they might wish to emulate.